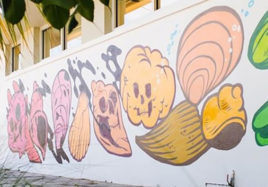 Brian Butler is a Miami-based designer, muralist and illustrator. He graduated with a BFA from Massachusetts College of Art and Design. He has built a solid reputation in the art world, and has worked with brands like Tumblr, Vice, Converse, Miami Heat, Target, Pabst Blue Ribbon, and Red Bull.

Music is a huge passion for him since his teenage years, and he has contributed a great deal to the industry through his artwork, using the name The Upper Hand Art. Brian Butler created everything from album cover art to promotional materials for musicians and music labels, and a huge amount of merchandise. “Show Drawn” is a project of Brian’s with over 2000 live performances completed. He stands in the concert audience and draws the show. Some of the many include Project Pabst, SXSW, Riot Fest, Governors Ball, Ultra, Pickathon, Clusterfest, Bonnaroo, Form Arcosanti, Motorhead Motorboat, in addition to many, many stand alone shows.

Brian Butler is known for his bold color and playful illustrative style. Pangeaseed foundation’s ocean advocacy project Sea Walls assigned ocean acidification as his SHINE mural topic. It is defined by NOAA as referring to “a reduction in the pH of the ocean over an extended period of time, caused primarily by uptake of carbon dioxide (CO2) from the atmosphere,” he said that a mantra of carbon punishment began to emerge. Brian takes environmental concerns very seriously and wanted to intensify the topic to drive the point home. He said, “I normally take a friendly aesthetic, but this one seemed like it should be more grim”.

“Carbon Punishment” is a piece on the dangers of carbon emissions on the ecosystem, specifically the ocean, and it’s made up of two parts: a mural, created by Butler, and accompanying heavy metal tracks by musicians Ale Campos and Eric Hernandez. “Ocean Acidification is essentially the sea’s version of what we’re experiencing in our atmosphere,” Butler wrote in a press release. “As carbon emissions shift the temperature and pH of the oceans, there’s a domino effect that depletes the ecology of the sea. Underwater habitats are lost, and food webs starve-away.” Brian’s SHINE mural is embedded with information via the Pixelstix app, accessible through smart devices. His will include a link to the songs on a Bandcamp page. 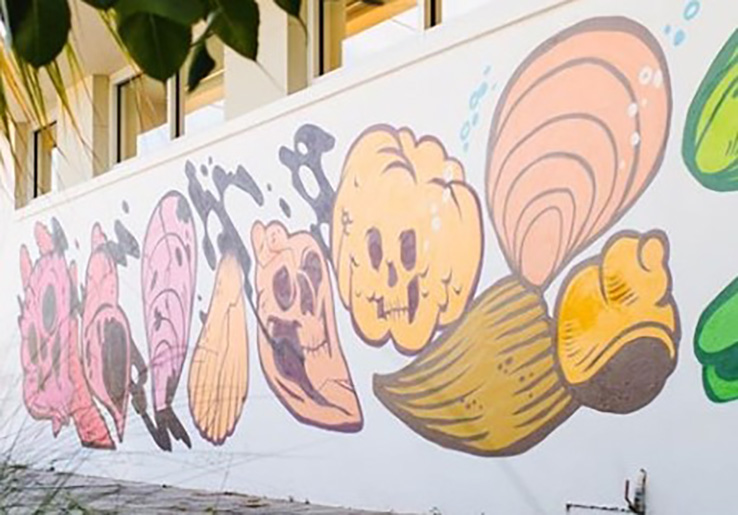 Find out more about Brian Butler: